So I've just committed to going to Eugene next April.  I was initially just thinking I should/would run the half and mostly because I had myself convinced I wouldn't run another marathon so soon after CIM and that I'd probably just run that again next year.  I want to work on stamina and speed and things like that.

But....I got to thinking.  Traveling for a half seems silly since there are about a million right around me.  And the girls I'm going with are running the full so I might feel left out (heh) (of course they might appreciate the built in cheering section).  I was planning on keeping my miles high(ish) (for me anyway) over the course of the next few months (working on that ever elusive speedy for me half) and I wouldn't have to start really long runs until late Feb/early March so I'd still get a bit of a break in having my Saturdays consumed by 20 milers. I also seem to have recovered nicely from CIM -- last week I ran 3 miles on Friday and 4 on Saturday -- all very easy miles and other than a little stiffness on Friday, I was fine.  Then I ran 4 miles again this morning and was totally fine and felt wonderful.

So lets just start at the beginning and I'll keep it as brief as I can.

I showed up in Sacramento around 1:20pm Saturday and went straight to the hotel.  I was staying with Terzah so I just needed to grab a key at the desk and go up to the room. She was at the pacer's meeting at the expo so I just dropped my stuff and went over there to get my bib and goodies.  The expo was okay -- not very big but I managed to get a CIM half zip and noticed they didn't have much stuff to purchase which was too bad, I was in a spending mood given this was my first. I also signed up for the Oakland Running Festival Half (in March).  So all in all -- was a good hour trip.

By the time I got back to the room, Terzah was back and we spent the rest of the afternoon chatting, chatting and more chatting.  Mostly consoling ourselves to the weather.  Oh yeah, we also ate the pasta dinner buffet at the hotel and watched The 40 Year Old Virgin on tv.  And maybe chatted some more.  Lights were out at 9pm.

I'd set four alarms to make sure we were up at 4am but naturally not one of them was needed.  There were some party goers making their way back to the room around 2am and thus both of us only dozed from then on.  We made it downstairs around 5, caught a bus to the start and that is when the real fun began.


(For more pictures go to the Sacramento Bee slide show) It is hard to tell from this picture, but the rain is horizontal and these are runners huddled under a gas station canopy in an attempt to stay dry.  After a requisite potty stop, we made our way into the convenience store directly behind the gas station that was filled with people attempting to stay dry.  It was pretty useless because we were already soaked from the walk to the porta potties and then to the store but it gave us a chance to apply more vaseline to our feet and stay out of the worst of it for 10 minutes.  Before we knew it, it was time to line up. I knew I needed at least one more potty visit but it was so miserable out I just figured I'd deal with that problem later.  I really didn't have a strategy -- I was super tense, and just wanted to start.  But in an effort to stay in a group, I lined up with the 4:10 group and huddled in.

The start was pretty uneventful -- National Anthem, wheelchair start and then I think there a 'ready, set, go' and that was it.  A woman standing next to me looked over and asked if it started and I said yeah, I think it did and sure enough we started moving a few seconds after that.

I just couldn't settle in. I just couldn't.  The combined stress of this being my first one and the horrible weather and there was nothing relaxed about me.  I kept telling myself to relax -- but I just couldn't and I think honestly that, combined with any effects of the weather (while it wasn't cold, thank god, it was chilly and the dampness just settled in) and my legs really weren't interested in running.  The highlights:

Mile 6 -- oh right, running into a strong headwinds is hard
Mile 7 -- shins?  really?  hurting?  you never hurt! stupid shins
Mile 9 -- will somebody please yell Marco so I can yell Polo.  I think that might be funny
right before mile 10 -- oh good, a lake because running through rivers wasn't fun enough

(what was funny, every time we'd come across a particularly deep puddle there was a collective moan from everyone as they hit it -- we were obviously already soaked but somehow hitting the puddles was just insulting)

The next thing I know is someone is shouting 'women on the left/men on the right'.  I hadn't realized there was a segregated finish but at that time all I could think of was thank god my turn into the first finishers chute was saving me probably 1.5 seconds. I didn't care about my time at this point, I just wanted to finish sooner.

Then it was over.  What is the biggest shame is all I felt was relief but not the good kind of a relief knowing it was a job well done.  I didn't feel any sense of accomplishment or even any kind of pride.  I was just so happy to be out of hell.  That kind of made me sad (later) because I remember the awesome feeling of finishing my first half marathon. At that time, I was more tired than I knew possible but I felt really good about the run.  I wanted that feeling again so bad but all I felt on Sunday was that I managed to survive and thank god it was over.

Clearly given the day, I started out too fast.  But at the time I really didn't feel it.  But I just fell apart in the second half.

But enough of the fuss -- there was good as well and now that it is 2 days in the past, it finally dawned on me I RAN A MARATHON!!!  Wow!  How cool is that.  The other good plus things I've learned:

1.  Saturday night slumber party with Terzah -- we were definitely well matched roommates and I look forward to the opportunity to do another race with her. She went from blogger friend to real friend.  And that's pretty cool.

2.  I totally get why people love that course.  The rolling hills were nothing (I was prepared) and the course had very few turns.  The volunteers were most fantastic and even in the horrid weather, there were quite a few spectators out.  The finish was beautiful -- right at the base of the capital with a huge beautiful decorated Christmas tree.

3. Vaseline.  Who knew?  Beats Body Glide all to pieces and I don't even have one blister.  Thanks Paul.

5.  It is possible to run 21 miles with a rain poncho on.  Eventually it just sticks to you and no amount of wind can move it.

8.  Beer and burger's are just as good after a marathon as a half marathon.

9.  A space blanket works well as a cover up while one completely strips on the steps of the capital building.

10.  Terzah was right, nothing beats a post marathon shower.  Nothing.

11.  I have fantastic friends both in and out of the blog world.

I'm a marathoner!!  And that's all that really counts.

I thought I was going to do an official post yet today -- in fact, kept rewriting it in my head on the drive home from Sacramento -- but I just don't have it in me.  I'm exhausted.  Beyond exhausted actually.  I need to find some more food and go to bed.

I'll do an official post tomorrow -- but let me just say that was hard. Extremely hard.  Pouring (and I mean pouring) rain and wind for 3.5 hours complete with street flooding, huge puddles and mini lakes just didn't make for the best conditions.  My ending time was 4:30:44 -- a little slower than I would have liked but all things considered, including a 3+ min potty stop I'm happy.

A marathon on Sunday? Really?

Well look at me, I'm doing a post.  Not that there's anyone around to read but what the heck.  It is about 5 days out from MY FIRST MARATHON so I thought I'd get a few thoughts down since I didn't manage to even provide weekly updates.  My not so profound thoughts: 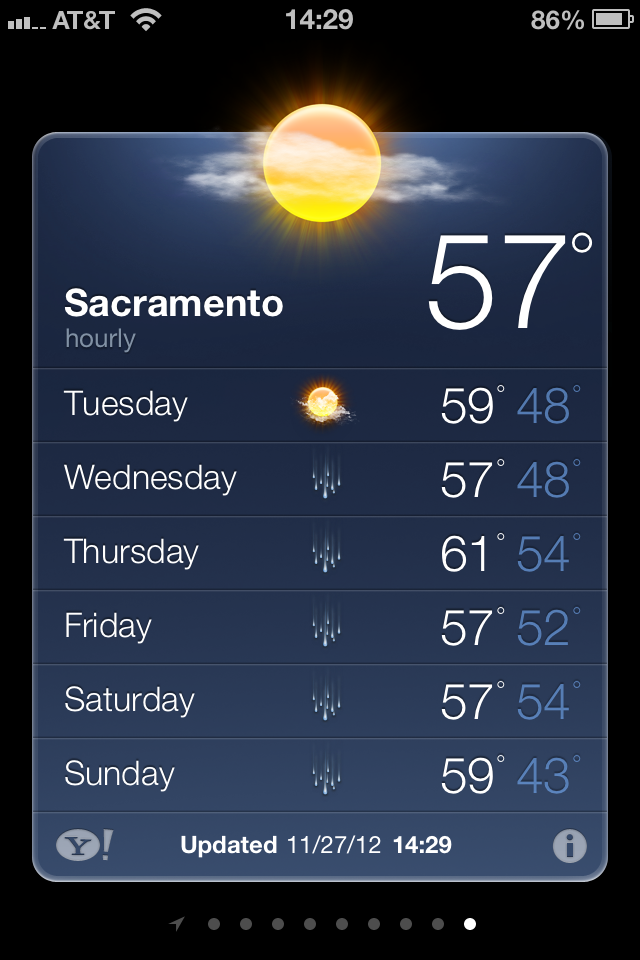 Over all I'm kind of meh with my training.  With all the drama of the spring (#stupidstressfracture) and early summer (#stupidback) I really didn't get the solid base that I had when I started down this path last January.  I thought I could manage it that is where the being tired came into play.  I'm almost positive that is why I got sick in October -- probably a bit exhaustion related.  I managed to get the miles in under the plan, but late October I gave up most speed work.  Flat out no energy.  So here I sit at a cross between 'oh I should have waited' and 'lets get this done so I've got a baseline established and then can work to improve'.  HA.  Fickle I am.

Anyway, on the positive side -- I did get the miles in.  Other than the sick week and then my three days off while I was in Japan, I logged mile after mile after mile. That just HAS to account for something, doesn't it?  The other positive thing is that all my long runs were done with rolling hills.  I had a friend tell me a route that mimics CIM for part of it so you betcha all my long runs were done there.

Lets see if I can get this done quickly -- not much to report.  I had a terribly sleeping week last week and it showed.  I did all the runs and made all the times but it was NOT easy.  A very uninteresting presentation:

Not too much else to report -- you can see the general theme was tired.  Oh so tired.

Other than that -- I've managed to purchase and try out some Brooks Pure Flows.  I've run 3 times in them (including today) and still not sure.  They feel like bricks though they aren't that much heavier than the Free Run's I've been in. But there is so much shoe.  However, my silly right foot does like the cushion.  But it didn't feel all that much better at the end of the 12 miler than my feet usually do at the end of a half in Frees.

So who knows -- will keep at them for a bit since they definitely help with the right foot and the pain that never goes away.